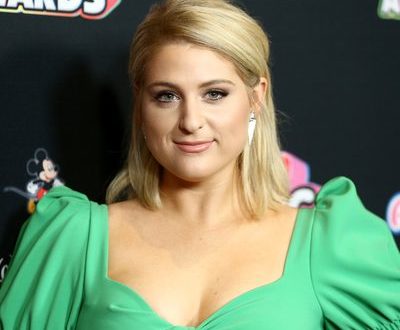 During her stint co-hosting “Today,” singer Meghan Trainor, 24, revealed how Carson Daly’s candor about his generalized anxiety disorder (GAD) helped her articulate her own struggle with anxiety.

The bride-to-be (she’s engaged to “Spy Kids” actor Daryl Sabara) told Hoda Kotb that she actually played Daly’s segment for her family. During the interview, which aired back in March, Daly talked about being “a worrywart kid” and later suffering from panic attacks during which “you feel like you’re dying.”

His words resonated with Trainor, who told her loved ones, “‘That’s how I was feeling.’ I just couldn’t say it.”

Around the same time Daly went public with his anxiety, Trainor was also opening up her own mental health struggles. The “All About That Bass” singer told Billboard in March that she was “mentally destroyed” and went to a “very dark place” following a vocal cord surgery in 2016 — her second such procedure in as many years.

In addition to dealing with the emotional fallout after her surgery, she also began experiencing unexplained physical symptoms: “I was crippled and had this pain,” the pop star said on The Dan Wootton Interview podcast back in March of this year. “I was going to ­doctors, psychologists and therapists, and I was like, ‘My back feels like someone has a flame to it.’”

It turns out that pain may have been linked to her anxiety. In addition to “excessive, unrealistic worry and tension,” people with generalized anxiety disorder can experience muscle tension, headaches, fatigue and heart palpitations, Prakash Masand, M.D., a psychiatrist and founder of the Centers of Psychiatric Excellence, tells LIVESTRONG.COM.

Eventually, Trainor’s physical symptoms landed her in the emergency room. “My throat was closing, and I was having trouble breathing,” she told Wootton. What she thought was an allergic reaction to something she’d eaten turned out to be a “a full-blown panic attack.”

Trainor ultimately got treatment for both anxiety and depression — two conditions that frequently go together. “Fifty-nine percent of all patients with major depression have an anxiety disorder,” said Dr. Masand.

Fortunately for Trainor and others with anxiety disorders, the treatment is “very effective,” according to Dr. Masand. In addition to psychotherapy (like cognitive behavioral therapy) and medication, “complementary and alternative treatments, such as yoga, acupuncture and meditation techniques,” may also help by controlling the body’s response to stress.

Trainor has said that her own recovery took months. “I climbed out of it with therapy and help from my family,” she told Elle.

Although the pop star’s anxiety came on after her surgery, Dr. Masand points out that GAD “can occur in anyone and can be unprompted,” though certain environmental factors may contribute to it.

“Like other psychiatric illnesses, it can be due to biological reasons,” he explains, referring to the imbalance of neurotransmitters like serotonin and norepinephrine that have been linked to anxiety and depression. Dr. Masand also notes that GAD may run in families.

In fact, Trainor previously shared that her brother, Daryl, also experienced panic attacks, and he was one of the first people she confided in about her own struggles.

”It blows your mind,” she said of having an anxiety disorder. ”What I learned is people have it and don’t talk about it.”

Of course, thanks to celebs like Daly and Trainor, that seems to be changing.

Have you struggled with severe anxiety or panic attacks? Is it something that you’ve been able to talk about with loved ones? Do you think it’s helpful when famous people share their mental health struggles? Let us know in the comments below.