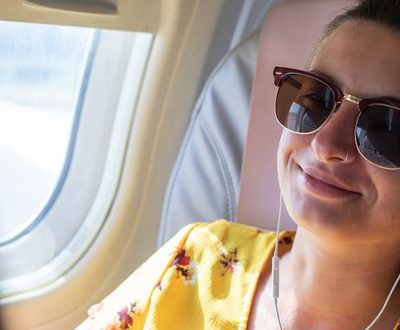 In case you hadn’t heard, the Mile High Club recently added two new members: An unidentified couple was filmed having sex in their cabin seats, giving at least two other passengers quite a show. (Talk about in-flight entertainment!)

The amorous pair is hardly the first to get frisky midflight. Back in November, two Delta passengers were arrested after engaging in oral sex (albeit under a blanket) at some 35,000 feet, and in March of this year, Virgin Atlantic flight attendants discovered a libidinous duo in the coach-class lavatory.

Curious about the motives behind these onboard dalliances and just how common they are, we did a little more sleuthing. While the Mile High Club doesn’t exactly keep accurate membership records, in a recent survey of 11,000 people, 5 percent of respondents said they’d had sex on a plane, and an additional 78 percent said they’d like to.

Apparently the desire to have sex in a public (or semi-public) setting is relatively common. According to a 2015 study published in the Journal of Sexual Medicine, 82 percent of both men and women fantasize about having sex in an unusual place (like at work or in a public restroom), notes Michael Reitano, M.D., physician in residence at Roman, an app for erectile dysfunction.

Does this mean we’re all a little bit exhibitionistic? Far from it, said study authors, who define exhibitionism as “solitary behavior in public places before a single unaware, unknown target.” Instead, respondents’ fantasies always involved sex with a partner in “public” places that were actually semi-private, rather than completely out in the open for everyone to see.

This makes sense to Dr. Reitano, who tells LIVESTRONG.COM, “For most people, it is the risk of getting caught — and not actually being seen — that is appealing.”

And it’s not just about doing something naughty and taboo. There’s a physiological component at play, too: “The arousal response that is associated with danger can also heighten the intensity of the sexual experience,” Dr. Reitano explains. The fear of getting busted basically triggers our fight-or-flight hormones (including adrenaline and norepinephrine), offering an added rush during sex.

As for the stories of passengers opting to get busy in their seats rather than taking their tryst to the bathroom, we’re guessing there may have been some in-flight (and pre-flight) cocktails involved.

So while their behavior may have been inappropriate (and, sure, a little gross and, OK, even illegal), it’s probably not an indication of some underlying paraphilic disorder, such as exhibitionism.

While there’s nothing deviant about sex in a public place (like a restroom), it might be “hygienically unwise,” notes Dr. Reitano. (Ya think?)

Not to get too graphic, but your hands could be touching toilet seats, stall walls, handles and more and then entering one another’s mouths and genitals or coming into contact with the condom that’s about to be inside you or your partner. The result? “Trace amount of fecal matter and urine on surface areas can result in E. coli and salmonella poisoning or a urinary tract infection,” says Jamie Dresselhaus of STDAware.

As for STDs, you’re more likely to contact one from your partner (especially if you’re not using a condom) rather than the toilet seat. “The survivability of an STD on a surface or an object is very low,” explains Dresselhaus. “There would need to be a significant amount of fresh, infected bodily fluid that came into contact with a susceptible body part, such as a deeply lacerated open wound or mucous membranes of the vagina, penis, mouth or eyes in order for infection to result.”

Reassuring? Yes. But not enough for us to overlook the whole “fecal matter” issue.

Read more: The 15 Grossest Things in Your Kitchen You Need to Clean Right Now

Have you had sex in a public place? How public was it? Would you do it again? Do you think sex in a bathroom is hot or just gross (or maybe a little of both)? Let us know in the comments below!

Previous Yes, the World Cup Can Give You a Heart Attack
Next 8 Traditional Chinese Medicine Practices That Seem Strange But Work