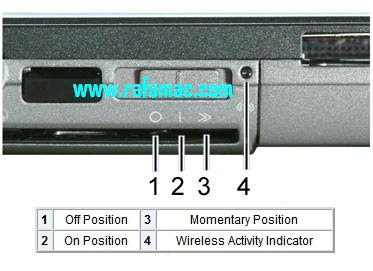 Some of the information from my experience and knowledge base for wireless radios switches.

For Windows Based Computers

If the drivers for the wireless adapter contain a setting to toggle wireless radio, it can be located using the

Here you will find a textbox with a list of selectable properties that are populated by the device driver. Once you

specific property. The name of the wireless radio property may vary because the listed properties are dependent on

each specific device driver. It should be fairly intuitive to determine the correct property if you simply have the user

read all the listed properties to you.

Many laptop manufacturers will place a physical switch on the outside casing of the laptop, so that the user can

end user forgets to switch it back. The best practice in these situations is to ask the user to look for a physical switch

on the case of the laptop, possibly with a symbol of a radio tower next to it. After turning the wireless switch on, the

user will probably need to refresh their network list.

Laptops built by certain manufacturers may have a specific keystroke set up to toggle wireless radio.

ASUS (General) -The F5R has a toggle switch to turn on and off the WIFI; it is located on the left side of the

Dell (General) – FN,F2 or FN,F8 or FN,F12
Dell d630 (D6xx?) latitude: toggle switch on the left side towards the front by the PCMCIA slots and headphone

IBM thinkpad (General) – Most have software switch or button on left hand side.
IBM thinkpad (model not further identified) with wireless switch on front edge of case.

Toshiba (General) – FN,F5 or FN,F8 or switch
Toshiba Satellite has a physical switch on front of case. FN+F8 shows whether wireless communications is

For MAC/Apple Based Computers

MAC OS X 10.4.x (Tiger & Earlier)
Open MAc Hard Drive > Applications > Utilities folder > Set the Configure pull-down to Airport.
Make sure the “Airport Power:” says on. (This is the status or your Mac’s Airport card.)
If not, click “Turn Airport On” button.