On Tuesday, home team Chennai Super Kings will play at the Chidambaram stadium after three years. Six more matches are scheduled to be held in the city.

After three years of anticipation, fans of Indian Premier League cricket franchise Chennai Super Kings can hardly wait to once again watch their team perform at the Chidambaram stadium in Chennai. The team, coming out of a two-year suspension related to a spot-fixing scandal, takes on Kolkata Knight Riders in the state capital on Tuesday. “It was like a carnival in the city every summer,” said Ashwin, a Chennai Super Kings fan. “Then it was lost suddenly for three years.”

The team won the opening match against Mumbai Indians on Saturday in Mumbai’s Wankhede Stadium. But amidst the usual memes and posters in support of the team in social media, the public debate has taken a new turn.

Over the past week, some Tamil Nadu political parties have asked why IPL matches should be held in Chennai at a time when several protests are being organised in connection with the Cauvery river water sharing dispute with neighbouring Karnataka. Seven IPL matches are scheduled to be held in Chennai over April and May.

At the same time, many have condemned the politicising of the Indian Premier League matches. “Don’t link sports with politics,” said some comments on social media.

Agitation for the Cauvery board

The current protests are related to a Supreme Court ruling from February 16 in which the court made a few changes to the Cauvery River Water Tribunal’s final award in 2007, putting an end to the decades-long dispute. In its order, the court stated that the Centre must form a board to oversee the sharing of river water between Karnataka and Tamil Nadu within six weeks. The deadline for this was March 29. In view of the Karnataka Assembly elections on May 12, the Centre had asked the apex court for an extension of the deadline till after the elections. But on Monday, the court refused to agree to this and directed that the Centre submit a draft scheme by May 3.

Now, farmers groups and political parties have threatened to disrupt the tournament to press for their demand that the Cauvery board be set up immediately. Small outfits such as the Dravidar Viduthalai Kazhagam, Tamizhaga Vazhvumurai Katchi, Viduthalai Thamizh Puligal Katchi, among others, have called for the cancellation of all IPL matches scheduled to be held in Chennai. At a press conference in the city on Monday, Velmurugan, leader of Tamizhaga Vazhvumurai Katchi, issued a veiled threat. He warned that if “untoward incidents” took place when players stepped out of their hotels, he and his party should not be blamed. Similarly, on Sunday, actor Rajnikanth, a recent entrant into Tamil Nadu politics, asked all IPL team members to wear black badgesduring the game in support of the Cauvery protest.

Following the threats of disruption, the Tamil Nadu Cricket Association has banned the entry of electronics within the stadium, as well as banners and flags that go against the views of the tournament’s organisers.

For a city so strongly attached to the home team and its captain Mahendra Singh Dhoni, how is Chennai responding to these developments? 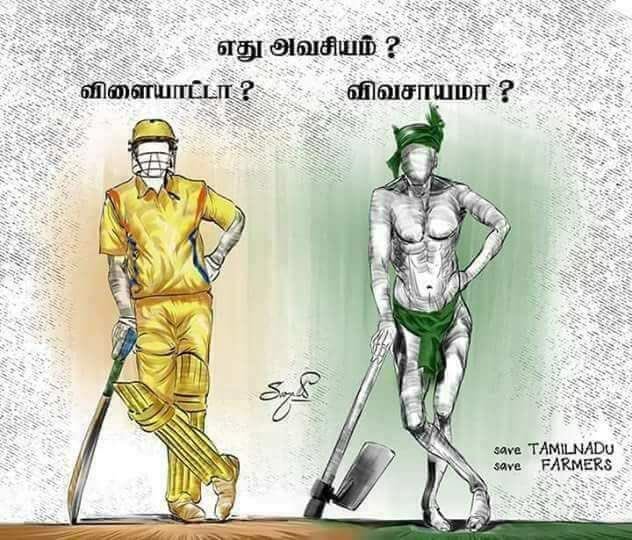 The relationship between the state capital and Chennai Super Kings is special, said Ashwin, who works with Fully, a YouTube channel. Last month, it released a video titled Dear CSK, which narrated the story of a young woman who has grown up under stifling patriarchal rules only to find a sense of liberation at an IPL match. The video garnered more than 17 lakh views in two weeks.

“Even though it is technically just a franchise, people have a very close bond with Chennai Super Kings,” he said. “Despite the fact that there are very few Tamil people playing, I don’t look at it as just any other team. I look at it as a team that represents my city.” Ashwin said that it was probably because of this bond that people felt they could “ask the team to support their cause”.

Similarly, popular YouTuber Prashanth Rangaswamy said in his videoCauvery vs CSK that despite being a Chennai Super Kings fan, he felt the call to boycott the matches was valid. “We should support each other and lift ourselves up,” he said.

He said that the fact that people were asking what was the connection between the IPL and the Cauvery issue showed the extent to which city folk had isolated themselves from the problems of the state. “But if some firing happens along the border, everybody says that their [Pakistan’s] cricket team should be boycotted,” he said. “Then, nobody asks: ‘What is the connection between the firing and the Pakistani cricket team.’”

According to sports commentator Prem Panicker, the Indian Premier League was a good means of drawing attention to the “mostly ignored, periodically resurrected” Cauvery issue. “To focus attention on an issue, you sometimes need to go to where the attention is already focussed, and try to hijack or divert it,” he said.

He added that though river water sharing, and the consequent agrarian distress, was a problem through the entire year, politicians did not consistently give it enough attention. He said: “Politicians, both extant and wannabe, climbing on the IPL bandwagon and linking it to the Cauvery come across as cynical opportunists, because outside of the IPL, and the occasional destructive bandh cued by one or the other court judgements, the issue is forgotten, the farmers are left to their own devices.”

For instance, he said, nobody bothered about the protests last year when farmers from Tamil Nadu protested in Delhi for drought relief, in vain. Panicker said that if politicians were really invested in the cause, they would have joined the protestors, used their mass base to mobilise support, rallied to the cause and forced the government to take notice and to act.

Condemning the game instead of fighting for a lasting solution to the Cauvery issue was sheer opportunistic cynicism on the part of political parties, said Panicker. “Their hearts beat for publicity, not for the farmers who put food on their table,” he said.

In what may prove to be Lionel Messi’s final World Cup, 2014 finalist Argentina is …