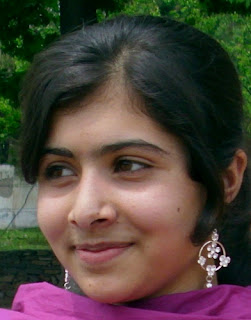 Diary of a Pakistani School Girl – Malala Yousafzai
Courtesy : BBC
Private schools in Pakistan’s troubled north-western Swat district have been ordered to close in a Taleban edict banning girls’ education. Militants seeking to impose their austere interpretation of Sharia law have destroyed about 150 schools in the past year. Five more were blown up despite a government pledge to safeguard education, it was reported on Monday. Here a seventh grade schoolgirl from Swat chronicles how the ban has affected her and her classmates. The diary first appeared on BBC Urdu online.

The night was filled with the noise of artillery fire and I woke up three times. But since there was no school I got up later at 10 am. Afterwards, my friend came over and we discussed our homework.

Today is 15 January, the last day before the Taleban’s edict comes into effect, and my friend was discussing homework as if nothing out of the ordinary had happened.

Today, I also read the diary written for the BBC (in Urdu) and published in the newspaper. My mother liked my pen name ‘Gul Makai’ and said to my father ‘why not change her name to Gul Makai?’ I also like the name because my real name means ‘grief stricken’.

WEDNESDAY 14 JANUARY: I MAY NOT GO TO SCHOOL AGAIN

I was in a bad mood while going to school because winter vacations are starting from tomorrow. The principal announced the vacations but did not mention the date the school was to reopen. This was the first time this has happened.

In the past the reopening date was always announced clearly. The principal did not inform us about the reason behind not announcing the school reopening, but my guess was that the Taleban had announced a ban on girls’ education from 15 January.
This time round, the girls were not too excited about vacations because they knew if the Taleban implemented their edict they would not be able to come to school again. Some girls were optimistic that the schools would reopen in February but others said that their parents had decided to shift from Swat and go to other cities for the sake of their education.
Since today was the last day of our school, we decided to play in the playground a bit longer. I am of the view that the school will one day reopen but while leaving I looked at the building as if I would not come here again.

Today at school I told my friends about my trip to Bunair. They said that they were sick and tired of hearing the Bunair story. We discussed the rumours about the death of Maulana Shah Dauran, who used to give speeches on FM radio. He was the one who announced the ban on girls attending school.
Some girls said that he was dead but others disagreed. The rumours of his death are circulating because he did not deliver a speech the night before on FM radio. One girl said that he had gone on leave.
Since there was no tuition on Friday, I played the whole afternoon. I switched on the TV in the evening and heard about the blasts in Lahore. I said to myself ‘why do these blasts keep happening in Pakistan?’

WEDNESDAY 7 JANUARY: NO FIRING OR FEAR

I have come to Bunair to spend Muharram (a Muslim holiday) on vacation. I adore Bunair because of its mountains and lush green fields. My Swat is also very beautiful but there is no peace. But in Bunair there is peace and tranquillity. Neither is there any firing nor any fear. We all are very happy.
Today we went to Pir Baba mausoleum and there were lots of people there. People are here to pray while we are here for an excursion. There are shops selling bangles, ear rings, lockets and other artificial jewellery. I thought of buying something but nothing impressed – my mother bought ear rings and bangles.

I was getting ready for school and about to wear my uniform when I remembered that our principal had told us not to wear uniforms – and come to school wearing normal clothes instead. So I decided to wear my favourite pink dress. Other girls in school were also wearing colourful dresses and the school presented a homely look.

My friend came to me and said, ‘for God’s sake, answer me honestly, is our school going to be attacked by the Taleban?’ During the morning assembly we were told not to wear colourful clothes as the Taleban would object to it.
I came back from school and had tuition sessions after lunch. In the evening I switched on the TV and heard that curfew had been lifted from Shakardra after 15 days. I was happy to hear that because our English teacher lived in the area and she might be coming to school now.

SUNDAY 4 JANUARY: I HAVE TO GO TO SCHOOL

Today is a holiday and I woke up late, around 10 am. I heard my father talking about another three bodies lying at Green Chowk (crossing). I felt bad on hearing this news. Before the launch of the military operation we all used to go to Marghazar, Fiza Ghat and Kanju for picnics on Sundays. But now the situation is such that we have not been out on picnic for over a year and a half.
We also used to go for a walk after dinner but now we are back home before sunset. Today I did some household chores, my homework and played with my brother. But my heart was beating fast – as I have to go to school tomorrow.

SATURDAY 3 JANUARY: I AM AFRAID

I had a terrible dream yesterday with military helicopters and the Taleban. I have had such dreams since the launch of the military operation in Swat. My mother made me breakfast and I went off to school. I was afraid going to school because the Taleban had issued an edict banning all girls from attending schools. Only 11 students attended the class out of 27. The number decreased because of Taleban’s edict. My three friends have shifted to Peshawar, Lahore and Rawalpindi with their families after this edict.
On my way from school to home I heard a man saying ‘I will kill you’. I hastened my pace and after a while I looked back if the man was still coming behind me. But to my utter relief he was talking on his mobile and must have been threatening someone else over the phone.